We made our landfall in Lautoka, on Fiji’s Island of Viti Levu, on Wednesday afternoon, a bit less than 48 hours ago.

All my wave pictures from the passage turned out to be rubbish. No surprise I suppose; I only took 250 of them, and my ratio of ‘deletes’ to ‘keepers’ is more like 500:1, on a good day.

Here is much of our crazy track. The land mass at the bottom is New Zealand. Fiji is off the top of the displayed area, if you extend out the straight line we began with from New Zealand. 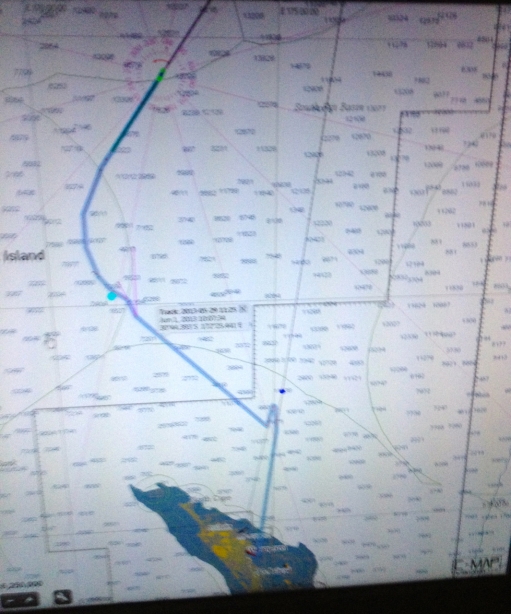 Below, morning calm and gorgeous blue inside Navula Reef as we arrive in Fiji 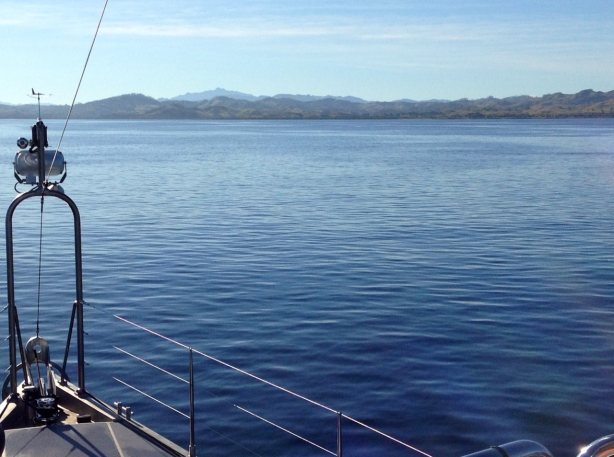 Captain Stan dinghied ashore to meet with officials and bring them back to Buffalo Nickel for our inspection and clearing in, a process that took a few hours. While we waited for their arrival, Anchovy Stan, Diane and I were quarantined aboard the boat. What to do? Settle in up above and enjoy the afternoon tradewinds with an ice-cold Monteith’s Pacific Ale, naturally.

Now it’s Friday, and we’ve just seen Stan and Diane off to the airport where they catch a flight to Sydney, Australia for the next chapter of their couple month holiday. We are so grateful to have had them aboard, they were a huge help in addition to wonderful company and dear friends.

Last night though, the Stans began to argue over the restaurant tab for our delicious Indian dinner. We consider it only fair to keep our crew well fed and hydrated, after all. So they resigned their positions! Can you imagine the nerve?? Oh well, he did hang our Q flag upside down, so perhaps it’s all for the best.

We have a couple more nights here in the Port Denarau Marina, then will head out to a more Fiji-like environment. It’s nice to be tied to a dock while we sort out a few things and offload our friends with their two months’ worth of luggage. But we feel like we just made a six day passage only to tie up to the Universal City Walk Mall in L.A.

We did have a misadventure with our boom rigging on arrival, which was our own fault. We’ve been towing Plug Nickel, our big aluminum dinghy, behind us since we arrived but will have that fixed so we can hoist the tender back up on deck. Apparently one or more pulleys and lines wrapped themselves the wrong way around our port boom during those rough winds and seas. This fouled the mechanism by which we raise and then lower the dinghy into the water, which was literally the first thing we undertook after dropping anchor at our port of entry.

I knew things were not right as soon as we engaged the power winch. But exhaustion does not contribute to sound judgment and… cue the worst excuse ever in a scenario for which there is no excuse… WE WERE IN A HURRY. On the plus side, the Stans salvaged the situation admirably with some imaginative thinking and good knot tying. We were able to get the dink poised just a few feet off the surface, where after a quick slice with a paring knife taped to the end of a boat hook, it dropped with little noise and no trauma into the water.

Below, Stan prepares for surgical intervention in order to launch our tender and reach the customs office before they leave for a long, long lunch. (Spoiler alert! He didn’t make it.) 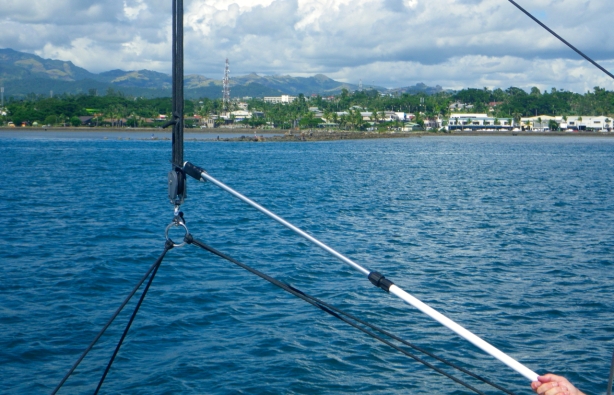 Those few minutes launching that dinghy turned out to present a more dangerous threat to our health and safety than anything we faced on our passage. Not having a sailing background, we are rookies when it comes to block and tackle matters and line handling. But anchor windlasses and power winches are dangerous equipment, so we learned our lesson: meticulous and consistent will be the way from now on.

Here’s Buffalo Nickel, looking cute as a bug med-moored between a pair of giant superyachts. She enjoyed her spa day but is looking forward to getting underway again. As are we.

6 thoughts on “Bula! Welcome to Fiji”