Now don’t jump to any conclusions, there be no divorcing going on here. It’s just that we are, in fact, in Seattle. And the Loveless is a scrumptious Seattle cocktail named for the Loveless building down the street from us. While mostly we just want to share our thoughts with you regarding our boat and our travels in this blog post, that title was simply too compelling to pass up. So let’s save the cocktail recipe for later, shall we?

Back to where we left off, so many moons ago now, wrapping up our short first cruising season aboard Buffalo Nickel in the Fiji Islands. Since we had commitments in the States at the beginning of October (namely the joyous occasion of Stan’s sister Kathryn’s wedding to her beloved Glenn) we decided to leave the boat on the hard in Fiji, in a cyclone pit, until our return for next cruising season in April.

That decision entailed some pondering and no small amount of discussion. The appeal was clear: having spent such a short few months in Fiji, leaving most of it unexplored, we knew we’d want another season in the area. Leaving Buffalo Nickel there would save passaging to and from New Zealand. We lucked out in having only a very short list of new-boat warranty items to address, and Circa felt confident they could send personnel to Fiji to accomplish any work there, so there was no compelling reason for us to return to New Zealand other than avoiding the cyclone risk.

On the other side of the argument, leaving one’s boat exposed in an area so prone to tropical cyclones is not for the faint of heart. Would we spend months compulsively checking weather reports and biting our nails? Leaving her in the water would increase her risk of damage should the area suffer a hit, while hauling her out for the storm season would be costly.

We did leave our trawler in the water in Mexico for a hurricane season once. That worked out well for us, though she was in a relatively low risk location and further protected from surge by virtue of her placement up a river estuary.

Vuda Point marina had taken a direct hit from a category 5 storm (Evan) the year before, with none of the hauled yachts sustaining significant damage due to the storm. Tipping the scales finally for us was finding a couple of experienced, responsible fellow cruisers locally to keep watch over our boat during the months we’d be away. As I write this, the eye of a tropical cyclone is in fact hovering over our island of Viti Levu. Did I say ‘fellow cruiser?’ What I meant was ‘guardian angel.’ 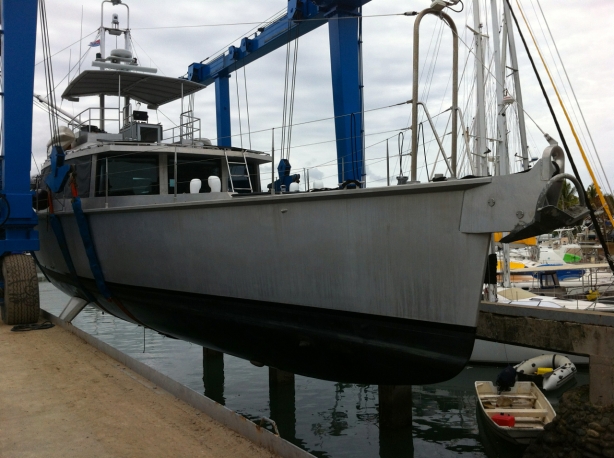 First, haul out at Vuda Point first thing in the morning. 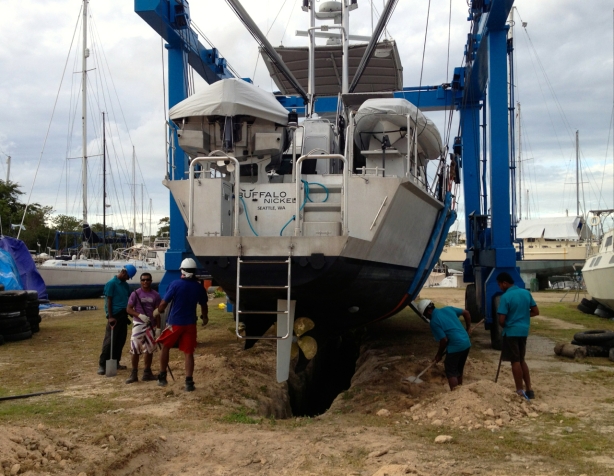 Next, complete the pit. The marina staff had schematics and our dimensions ahead of time, but they leave most of the fine tuning to be done manually, with a team of six toiling away all day long digging the hard packed earth away with shovels in the tropical heat. 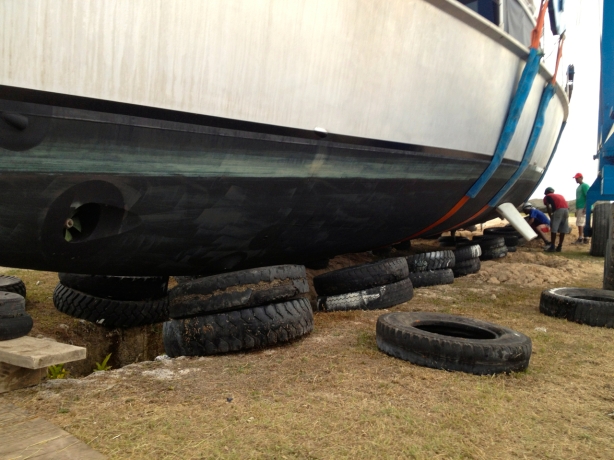 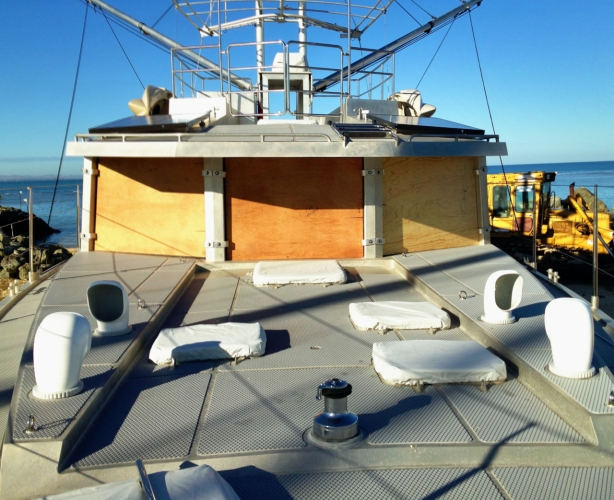 We prepared the boat primarily with rain, heat, humidity and UV light in mind. A cyclone wouldn’t hit without notice, leaving time to tweak decks and rigging for furious wind conditions should that scenario occur.

FPB’s are provided as part of our parts package with protective covers for all windows, constructed of heavy varnished wood, each fitting its particular window space perfectly. To our knowledge, none of the owners to date have taken all the panels when they’ve left New Zealand, because… ugh. Weight, bulk, hassle. I suspect we just all max out on the stowage process involved when taking delivery of a new FPB. While the boat happily swallows a massive number and volume of spare parts, fluids and gear, all of it disappearing nicely into logical places, I think as owners we give out well before our boats do. We took three of the wooden window covers with us; they stowed conveniently under the mattresses in two of our three sleeping berths. Those are covering the three front windows you see above. Then we bought, measured and cut the rest of them from cheap local plywood. We used the mounting hardware Circa provided, which perhaps you can see in the pic above screwed into the aluminum, to secure all the panels, protecting our windows from the elements and helping with light and temperature control within. 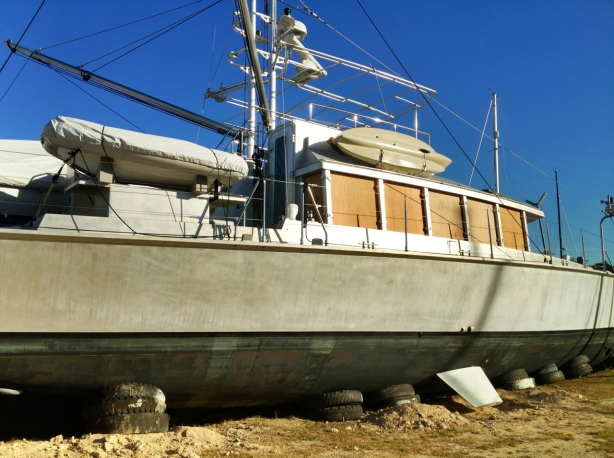 Only 10 amp shore power is available for hauled boats, in addition to our solar panels which we left exposed. With almost all systems shut down inside, that power has been plenty for our ‘guardian angel’ to run the air conditioning once a week to dehumidify the interior. (Our air conditioning uses domestic fresh water within coffer dams, not sea water, so it can be operated with the boat out of water.)

We set up Maretron’s N2K View mobile app so that we could access our monitoring data, such as the state of charge of our house battery bank, wherever and whenever we wanted. Brilliant to be able to do that, right? Then within a week, Buffalo Nickel lost her internet connection, probably something to do with our Vodafone USB stick aboard. So that part’s not so brilliant. It was a nice idea though.

There are various arguments to be made on either side of the fluids issue. We went with fuel tanks pressed full and domestic fresh water tanks empty.

Once we finally blew Buffalo Nickel a goodbye-for-now kiss, we flew to the States and quickly got swept away in a maelstrom of holiday-making with family, reunions with friends, and generally visiting almost everyone we’ve ever known and loved (though a few still slipped through the cracks.)

We had a goodly amount of this… 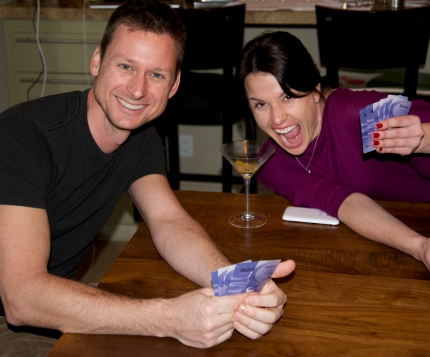 and way too much of this… 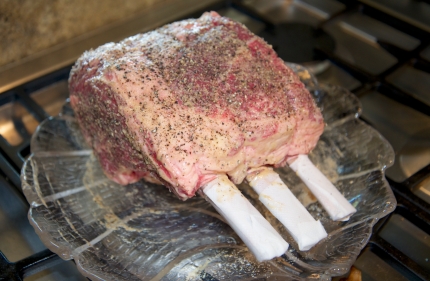 but mostly, of course, it was all about this… 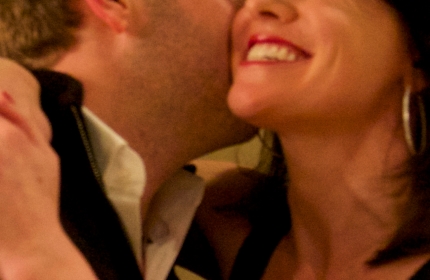 Which brings us back, finally, to Seattle. We haven’t had a land based home since 2006 when we took delivery of our Selene. We enjoyed that untethered lifestyle for years. With the internet, it’s easy nowadays to locate and rent a short term flat pretty much anywhere on the planet. During storm-season breaks off our boat, we would visit loved ones, then look at each other and say, “So, we’ve got a couple of months, where in the entire world shall we spend them?” And while we feel no less adventurous than we have in the past, the living out of suitcases for months on end aspect has lost its luster, if in fact it ever had any luster to begin with.

Anticipating this day would come sooner or later, we’ve had a small loft style condo in Seattle for years, rented to a nice tenant. During hurricane seasons, Seattle would make a great pied-a-terre for summertime, we figured. Now that we’ve finally decided to make this loft our own, we’re cruising in the southern hemisphere so it’s winters in Seattle. Who does that, right? The locals keep asking us what we’re thinking, leaving Fiji to spend January and February in the cold, wet and grey. Truth be told we have been thrilled with our time here. No need for a car, we can walk or bus most anywhere. And for now, sweaters, socks and scarves are a novelty and a treat, the whole experience a nice counterpoint to the more remote tropical spots we’ve spent our time cruising.

We’ve been asked repeatedly, now that we’re a year into it, to distill our thoughts on the FPB experience as compared to that aboard a traditional trawler style yacht. So we’ve done that, and will post that discussion as a separate blog entry in the next week or two.

Meanwhile, we will leave you with our version of the Loveless cocktail. It’s served at Poppy, one of our very favorite restaurants in all of Seattle and only a block from our loft. Knowing the ingredients but not the exact proportions, what follows is merely our best guess after a bit of tinkering around. 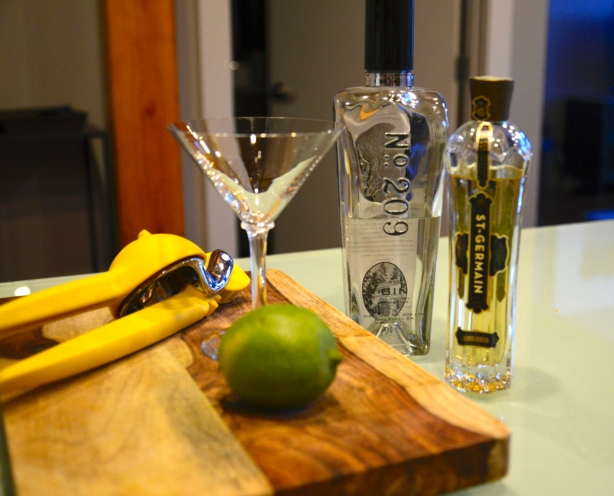 It’s a gin based drink. I don’t favor sweet concoctions, so the first taste of elderflower liqueur always gives me pause for about a nanosecond, until the fresh lime steps in with its refreshing tartness for a wonderful balance.

Combine in a cocktail shaker, add rocks and shake. Double-strain into a cocktail coupe or martini glass. Garnish with a zest of orange or lime. 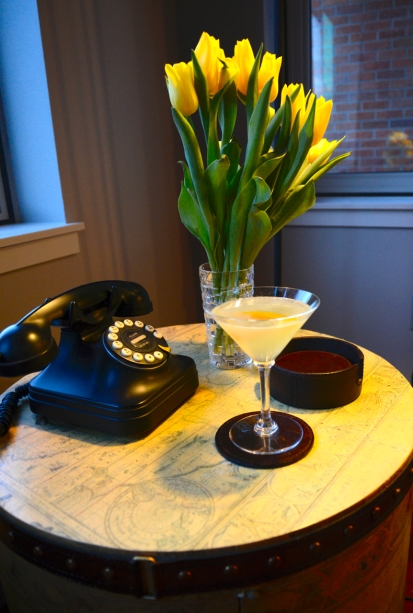