While underway on the calm inter island passage between Suva and Savusavu, Jeff encouraged Stan to fiddle with our speed and interrogate its effect on fuel consumption, engine load, etc. We have lots of data at our fingertips from our Maretron monitoring system, which can be displayed any which way we want, so it was a fun exercise for them.

Ignore the speed through the water figure above, that instrument has never been properly calibrated, so regardless of current or other conditions, it invariably reads 1-1.5 knots less than our speed over ground. (One day when we’re in calm current-less waters we will try to adjust its offset.) The rest of these data, though, show a sort of sweet spot we have settled on. For calm inter island hops, which in fact we spend much of our season doing, we can travel at or close to 8.5 knots and achieve 3.3 nautical miles per US gallon of fuel consumed. This saves us a bundle in fuel expenditure over the course of a season. We increase the engine load to 45-50% every so often. If conditions are sporty, we prefer to travel at our regular ‘fast’ speed for comfort’s sake. Also worth mentioning that our Naiad active stabilizers are running in both scenarios. Turning them off would increase fuel efficiency further. But though it’s been known to happen, conditions need to be quite calm before the Admiral will endure running without roll stabilization. In those truly calm sea states, our tendency is to run on our Yanmar wing engine instead, which needs its own regular exercise anyway and seems to be quite fuel efficient. Our hydraulic stabilizers will only function when our main engine is engaged, so we have no active roll stabilization when using the wing engine.

On our way to the town of Savusavu on the island of Viti Levu, we stopped at the island of Makogai (pronounced mah-kong-GUY) where one of the kind villagers there showed us around their lovely island. They have a giant clam nursery in the village, where these amazing creatures are spawned and raised to a large enough size to be transplanted back into their native habitat around the various islands. They also rehabilitate and raise sea turtles with the same goal in mind.

When we reached the sheltered river-like channel where Savusavu is located, the larger main marina’s mooring field was full. The logical thing would have been to anchor just outside of the moored boats, but we spotted another smaller marina with a mooring field further inside the channel, and for whatever reason decided to travel further up the channel and grab a mooring ball in this unknown-to-us marina. Devoid of local knowledge, we nearly stumbled into real trouble with that little maneuver.

The photo of our Furuno chart plotter image below shows our track, from left to right. Please note that the chart itself is, typically for Fiji, not quite accurate. All obstructions are fully submerged, and the only safe water follows the S-shape course we more or less ended up making. There was complete low cloud cover, naturally, and the water is murky there anyway. There are a few sticks in the water, whose message, other than ‘watch out,’ was not obvious to us in directional terms. The next day, someone mentioned on the local VHF net that boats should never attempt entry into this part of the channel without first transiting ever so slowly in their dinghies. Hmm. A day late for us, and nearly many dollars short! 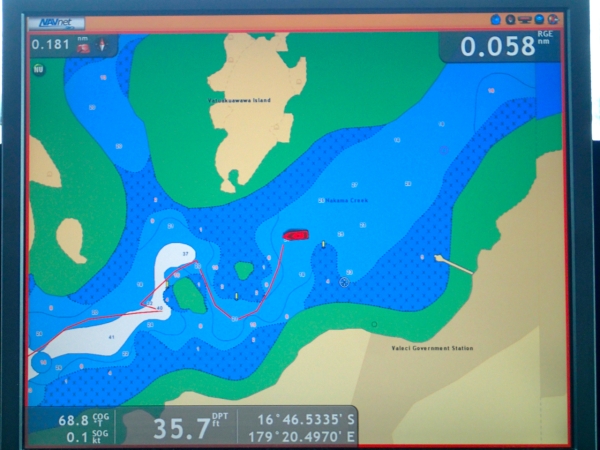 That first acute angle backward you can see in the red track represents Stan putting Buffalo Nickel in reverse when our forward looking sonar showed an ominous situation ahead of us. Of course you have to be going dead slow to begin with, in order to make effective use of such information and reverse yourself out before you hit. (Clueless we might have been, but not stupid!) We muddled our way through with the much appreciated help of our forward looking sonar. I’m sorry not to have pictures of those displays, because they truly show the value of this instrument in staying within safe channels among reefs. But three of us were doing a lot of flapping of arms, wringing of hands and swearing, while the fourth was gamely trying to ignore such distractions and drive the boat, which he did with style and grace. Nobody reached for the camera until we were through. At some point Curly, the guy who looks like sun-tanned Santa in the photo below, arrived in his dinghy to help guide us through. Curly is a local fixture in Savusavu and an invaluable resource to the cruising community in all of Fiji. We were awfully grateful for his assistance.

We remained in Savusavu only a few nights, mostly because having recently arrived in Fiji, we really were hankering for an anchorage where we could get the full ‘Fiji experience,’ meaning: jump off the back of the boat and swim at will in some nice clear water. Savusavu has a lot to recommend it, but not that particular quality, so we moved on to Viani Bay.

Viani Bay was a lovely experience for us. There is no village there, but Jack Fisher’s house is right on the shore and serves as the focus for shore and water related activities among the cruisers anchored in the bay. Jack’s family has lived there for generations; they are warm and welcoming. Jack rowed out to Buffalo Nickel daily, offering us fresh bananas and papayas (which the Fijians call ‘paw-paw’,) freshly caught walu (a white-fleshed fish known in the States as escolar) and other goodies in exchange for donations to the local school and church. Stan also gave Jack his Tilly hat with neck guard, to replace the ratty looking baseball cap he had been wearing every day. Jack seemed truly thrilled with his new hat.

The first night, Jack’s family hosted a lovo, the Fijian equivalent of a barbecue feast, and invited all the cruisers.

Above, one of Jack’s granddaughters tends to the burning of coconut husks, which keeps the mosquitoes away.

Most of the food, which sometimes includes pork but in this case fresh fish, chicken and side dishes, is wrapped in leaf packages, the whole mound of which is wrapped in more large leaves and roasted in a pit under a tarp.

Once the cooking was done, we all feasted on fresh fish in coconut milk, cassava root, cabbage salad, potatoes, chicken and stewed taro leaves.

From our anchorage in Viani Bay, the view spans the short distance across the Somo Somo strait to Taveuni Island. Taveuni  is a mountainous island whose peaks remained under cloud cover every day we were there, while our own anchorage saw mostly sunny skies. Each day we saw at least one rainbow over Taveuni, including some horizontal and inverted ones.

Between Viani Bay and Taveuni island is the Rainbow Reef, which contains some of Fiji’s most celebrated scuba diving sites. We have a dive compressor and carry four scuba tanks, but Jeff and Julie had not brought their regulators with them on the trip, so we booked a couple of excursions with Dolphin Bay dive resort so that we could all four dive together. They were located a couple of bays distant, but were happy to pick us up right off our boat in the morning, take us on two stunning dives with lunch in between, then drop us off at day’s end back on our swim step. And it was just the four of us accompanied by a couple of dive masters. Perfect!

One day we took Plug Nickel, our big tender, over to Taveuni, where we had a taxi driver Jack knew take us across the island to a National Park where we hiked a few miles up through the jungle to see some waterfalls. It was a lovely day and it felt great to stretch our legs. 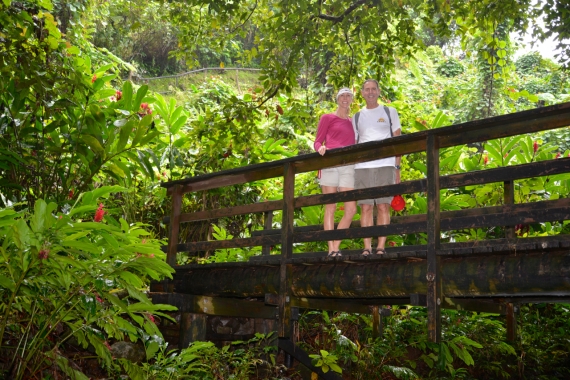 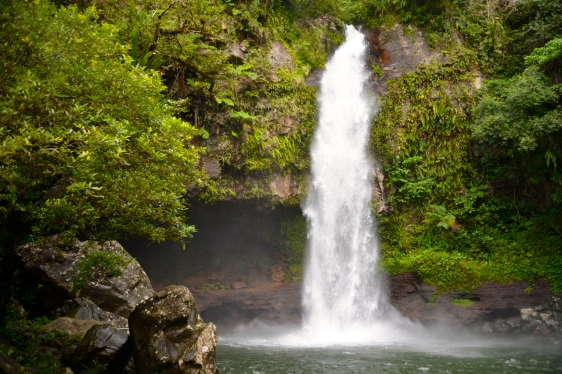 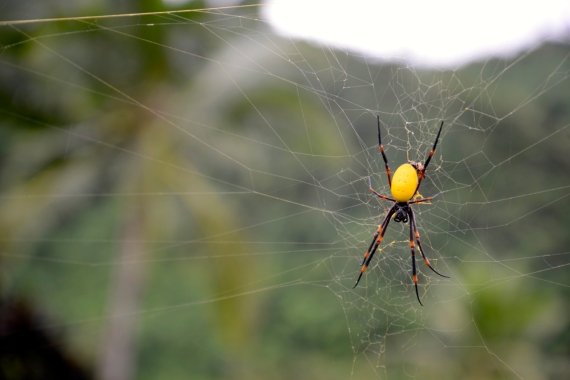 The crazy looking spider above was as large as my open hand. Not that I got close enough for an accurate comparison; I maintained a safe distance of 30 feet where I sat hugging my elbows, rocking back and forth. The back, or abdomen, or whatever hideous part that is, looks to me like one of those small crackers, the ones with lots of artificial coloring and cheese flavor. The ones impoverished male college students seem to favor in large quantities? In fact, in that peculiar way nature has of fooling some species into mistaking predators for food, I’ll bet impoverished male college students are the typical prey of this spider. They would be about equally matched in a physical struggle, but that’s without taking envenomation into account. Anyhoo… 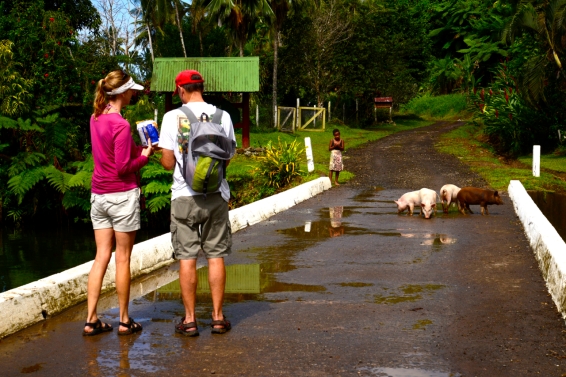 On the way back to our van and driver, a small group of piggies decided to follow us down the road. (What’s a group of pigs called? Flock doesn’t sound right. An oinking of pigs? A hamlet? A snuffle?)

The remainder of our time in Viani was spent relaxing and snorkeling the reefs. It’s impossible to get across in photos the sheer variety of size, shape and color of corals, both hard and soft, we would see down there. But here are a few pics anyway: 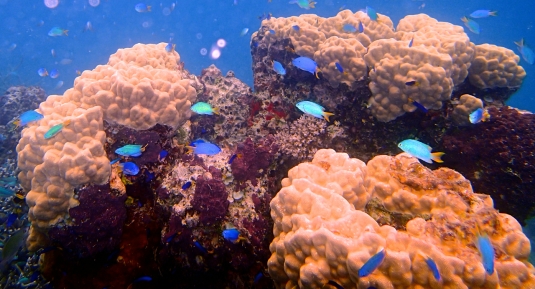 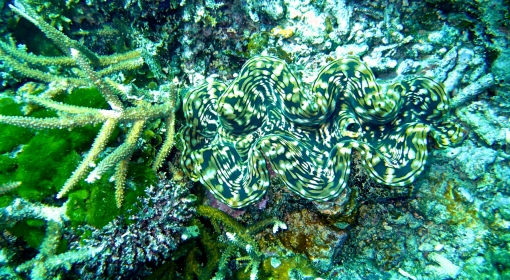 It might be difficult to make out, but in the photo above, the squiggly lines with the spotted pattern are a giant clam viewed from above. We saw lots of giant clams, and they have some striking colors and patterns. Their shells are also plentiful ashore. 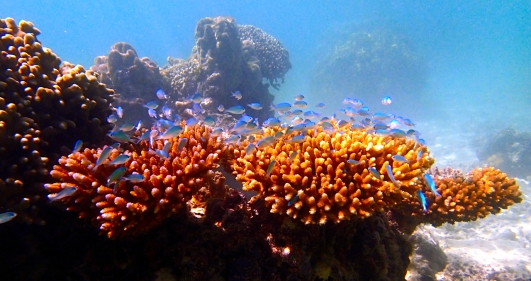 After stocking up on the fresh stuff again, both from Jack and the vegetable stands on Taveuni, we set off for the island of Vanua Balavu in the northern Lau group. Until tomorrow…