Our last anchorage before bidding Jeff and Julie a sad farewell was the small island and village of Susui. Though we spent only 4 or 5 nights here, we all fell rapidly in love with the place. We really clicked with Jacob, the kind, quiet man who met us when we came ashore and escorted us to the chief’s house. We were only the 5th yacht to visit the island this year, and the first motor yacht to visit, ever.

The 90 villagers were warm and welcoming, with especially open arms toward Jeff and Julie once we told them our friends would be ending their first visit to Fiji in just a few days, and had yet to taste kava or attend a church service in Fiji. Susui village is Methodist, like most of the villages we have encountered here.

We snorkeled in the area, naturally.

The next morning we returned for church. The service was entirely in Fijian, but with a heavy emphasis on singing which is typical and a joy to listen to. Fijians are natural-born singers, and every adult and child participates in the harmonies, which are so lovely. The children’s choir learned an English-language gospel song to perform especially for us, which was quite touching. We didn’t understand a word of the service, of course, but from the fire-and-brimstone tone, the four of us concluded that a very bad thing appeared to be at issue, and we were all hopeful that we weren’t guilty of doing the very bad thing.

We were invited to a feast at the pastor’s house after the service, along with the whole village. A few of the women (they rotate Sundays) had spent the whole morning preparing fresh fish, curries, vegetables, bananas and cassava. 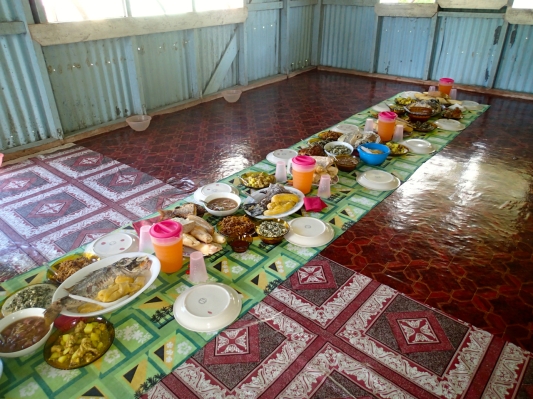 We ate in shifts. The four of us were in the first shift, a position of honor along with the village elders. (When a party is thrown specifically in your honor in Fiji, which this one fortunately wasn’t, typically the guests of honor are expected to finish their entire meal before the rest of the folks even begin to eat. Now that is just awkward.) Eating is done with hands only, though we uncultured Yanks were allowed to use the serving spoons as eating utensils if we wanted.

Above, the second shift eats. Children are traditionally in the last group to eat, leaving them at the bottom of the pecking order in terms of access to good protein. This contributes to Kwashiorkor, or protein-calorie malnutrition, among small children in some of these villages… though fortunately not this one.

The kids, all in their Sunday best, flocked along to see us off on the beach. 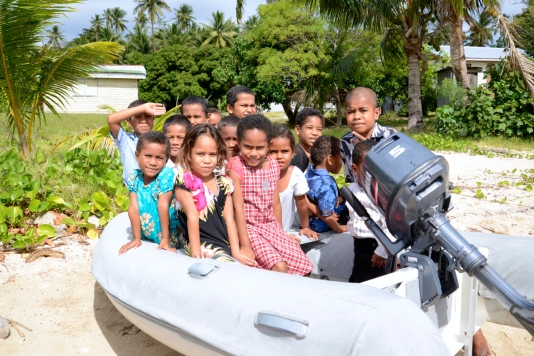 One day, Jacob and a couple of the guys took the four of us, along with John and Kathy who had arrived aboard Mystic Moon the day before, to gather oysters in a sheltered nearby cove. 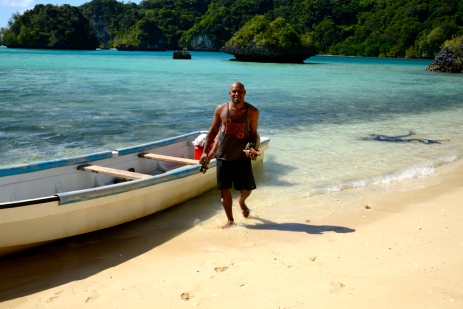 They harvested the oysters from the mangrove roots…

… then prepared them while we lollygagged around on the beach. 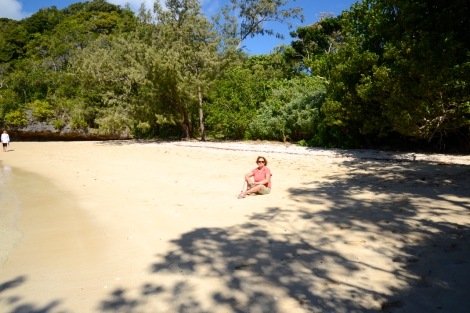 They were simply roasted in an open campfire, then shucked, and eaten with a dipping sauce of lime juice and fresh chile peppers. Delicious. Alcohol is not welcome ashore in any of the Lau group, though Julie and I quietly agreed that a chilled crisp Sancerre would have been just the thing to round out our picnic. 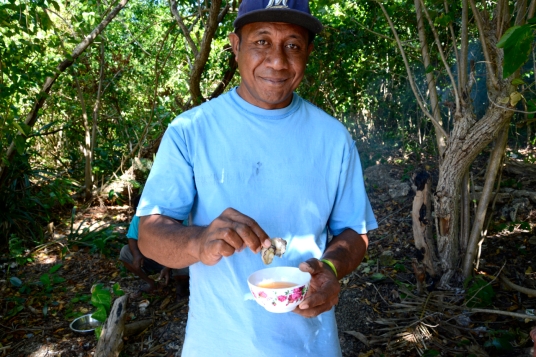 That evening after dinner, we all returned ashore to the village where we were invited to a kind of bon voyage party for Jeff and Julie. Pretty much the whole village seemed to be in attendance; they had woven us each necklaces made from local flora, and for Jeff and Julie some gorgeous flower ones resembling Hawaiian leis to honor them especially as a farewell. It was heartwarming to us what a big deal they made of this goodbye celebration when we had only been there a few days. The type of party it was is called a Meke (pronounced MEH-keh.) They had never done one before for an outsider (non-Fijian) and the women spent the whole day practicing and teaching the kids what to do. First the children, then the adult ladies, sang and danced for us.

I found myself wishing I had a translator of some kind to give us insight into the songs, especially the hand gestures. Then finally, the ladies took the children home, and the men gathered with us for some kava consumption, singing and guitar playing. We understand that it’s fairly common for the women to retire together to drink kava themselves, but whenever we’ve been included it’s been with the men. Women are only welcome to drink kava with the men if they are accompanied by a husband, or a close male relative.

The preparation and consumption of kava is somewhat labor intensive and ritualistic. First, the dried root is pounded for quite awhile into a powder.

Next, the powder is filtered into room temperature water in a special wooden bowl called a tanoa. That big bowl is carved from a single piece of Fijian hardwood known as vesi; the borders of the bowl are typically intricately carved and sometimes inlaid. In any case, the resulting liquid is nearly odorless and looks like muddy water. 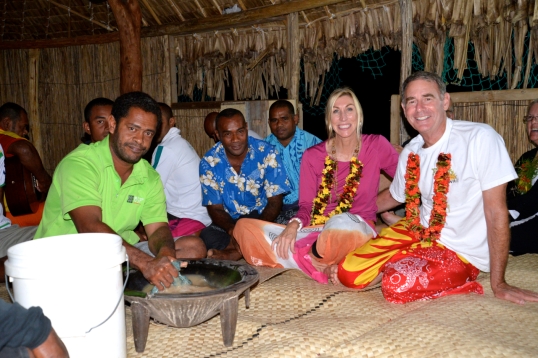 The filtering above is being done through a dark blue cloth. Usually a plain white rag is used, which in combination with the muddy appearance of the kava drink or ‘grog,’ does not add aesthetically to my enjoyment of the experience. Once I got the image in my head of someone’s dirty underwear being put to use as a kava filter, it simply will not go away. You’re welcome.

The taste is mildly peppery but not a strong flavor and we don’t find the taste unpleasant per se. Most beverages we folks normally make a fuss over are served either hot or chilled. This one is neither. Given that, the dirty-dishwater look of it and the fact that you are expected to chug the entire coconut-half serving bowlful (called a bilo) without leaving a drop behind, the whole thing can be a bit daunting to some. But you can request ‘low tide’ versus ‘high tide’ to indicate your preference in portion size, and you can politely decline any more after glugging down the first bowl or two if you like.

Oh, and did I mention, the drink is prepared by hand as you can see, repeatedly stirred with bare hands, and the same bilo (drinking bowl) dipped and shared among all in the room repeatedly as the evening progresses? You just have to get over some of this stuff we figure, at least temporarily, if you want to enjoy hanging with new friends in exotic places. Here’s Kathy, downing another bowl of grog, hoping that the guy coughing and sneezing on the other side of the room is no longer contagious.

The chief is always offered the first bowl, then it proceeds in a non-random rank-related fashion from there, with one man mixing and straining, one man offering the bilo to the next recipient, another one fetching water, etc. When you are offered a bowl of kava, the appropriate response is to clap your hands once if you are going to accept it. Then take the bowl in your two hands and chug it down in a single draft until it’s gone. Everyone in the room will clap three times. You say “Maca!” (pronounced MAH-thah, which means ‘hey I drained it!’) Then hand the bowl back to the guy who served it to you. But like I said, the kindly Fijians are ever tolerant of us clueless cruisers so you get a pass if you goof things up, as long as you smile warmly and enjoy yourself.

Kava has mild narcotic properties, but at least in Fiji the kava is not awfully powerful. Meaning that if you drink it in very large volume, you can certainly get well lit. But for most females who can’t conveniently exit the hut to stumble around in the pitch black looking for a spot to relieve an aching bladder with modesty and decorum, this doesn’t happen. The men have more options. What you get when you take just a few drafts of it is a numbness around your lips and tongue, and the warm fuzzy feeling of being welcomed by new friends. Having spent our entire season last year in Fiji, Stan and I felt gratified that Jeff and Julie got to experience the the unique warmth and joy of Fijian villagers before ending their vacation here.

One of the traditions around kava drinking is the telling of stories and funny anecdotes. To that end, Kathy asked one of the guys who had accompanied us on our oyster expedition if there was a story behind the pink ukelele he was playing. Here it is, in all its tiny, baby-pink glory: 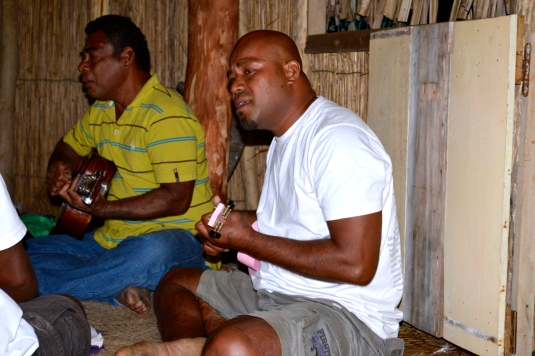 I smiled, sharing the expectation of getting a chuckle out of the ensuing tale. Surely there would be some reason, right? For a big manly-man like this dude to be sporting that color instrument? In response, not only the guy in question but all the men just stared at us blankly. Not as in ‘how awkward that you’d even ask that,’ but as if we’d requested the story behind his T-shirt being white, or his friend’s brown guitar. Like we were totally strange to expect a story out of such a thing as a big bad looking dude playing a pink ukelele.

Screaming social liberal that I am, I am not used to feeling like a culturally knuckle-dragging, gender-stereotyping bozo. But that’s how I felt, especially later when I thought back on it. They truly don’t have that preconception, even compared to a liberal-thinking, pseudo-enlightened gal like me. I felt so busted! And now I notice, in the pic above with the men pounding the kava root, that one of them is wearing a shocking pink sulu. Of course, he gets a fashion fail regardless of gender or sexual orientation for pairing it, appallingly, with the butter-yellow, navy and white rugby shirt, but that’s beside the point. My name is Valerie, and I’m a gender-stereotyper. Or a ukelele-stereotyper. Or something.

Anyway who needs a drink?

Not of kava, due to the aforementioned aching-bladder-gritted-teeth-while-bouncing-back-in-the-dinghy-late-at-night scenario. But during our time with Jeff and Julie, we rediscovered the joys of the Hemingway daiquiri at sundown.

I first got this recipe years ago from the bar at the Connaught Hotel in London. The fresh grapefruit juice that Papa Hemingway introduced to this cocktail puts it many steps above a traditional daiquiri, in our opinion. Apparently he introduced it at one of his Havana haunts, La Floridita.

Here’s the recipe for a Hemingway Daiquiri. The asterisked substitutions are a version we recently discovered at our favorite bar in our Capitol Hill neighborhood, Canon Seattle.

lime wheel, orange or grapefruit twist, or whatever strikes your fancy, for garnish

Add all ingredients to a cocktail shaker. Add rocks and shake well. Double-strain into a coupe, garnish and enjoy. Hurry now, so you can catch the sunset.

** substitute Crème de Pamplemousse, a grapefruit liqueur, for the maraschino liqueur, to lend an extra kick of grapefruit. We had to look around a bit before finding this stuff in a well stocked liquor store in Seattle. It looks like a  bottle of rosé wine.

Next up: Fulaga Island in the southern Lau

By the way, thanks to Julie for some of the photos in this and the previous blog posts from this season. I’m too disorganized to figure out whose pics were whose or I would give them each the attributions they are due!

2 thoughts on “Susui Island, the Color Pink, and Hemingway”