The second week of March this year found us avidly following developing weather in the South Pacific from the comfort of our cozy Seattle digs. For the cyclone season, we had left Buffalo Nickel once again hauled out into a protective ‘pit’ in Vuda Point Marina, Fiji, while we visited the States. An intense tropical storm was threatening not only to up its game to Category 5, but also to hit Fiji, so we fretted about our boat.

That storm did up its game, becoming Cyclone Pam, but instead of Fiji it went for the island nation of Vanuatu to the west. With 155 mph sustained winds (highest sustained winds of any storm in the southern hemisphere) and gusts to 200 mph, it wiped out power and communications in this poor nation of 82 islands. 90% of buildings were damaged, and thousands of people displaced. With few airstrips, most local boats damaged and storm season still ongoing, many of the islands and their villagers were cut off from all contact or aid even four days after the storm passed. Some islands were completely without fresh water or shade during that time.

“So, now what?” we wondered. We had planned to spend some time in Vanuatu during the upcoming cruising season. Should we bypass it altogether and just make for New Caledonia, with its postcard-worthy beaches, spas, and French food and wine? Cylclones damage reefs so scuba diving on Vanuatu would be negatively impacted, along with an infrastructure that was third-world to begin with. But more to the point, we could not have slept well at night after frolicking all day in the face of their devastation.

During our two seasons cruising Fiji, the people had been so generous and welcoming to us yachties. Just walk past a home in a Fijian village at mid-day, and the family will invite you in for lunch. They’ll mean it, too. Whenever a cruiser faces a challenge – runaway dinghy, boat gone aground – the villagers are right there, dropping everything to lend a helping hand. We’d heard the people were similarly genuine and welcoming in Vanuatu. We figured this would be a good time to give something back instead of sightsee. Gotta keep the karmic ledger in balance…. or whatever it is that compels agnostic heathens like us to do ‘good works.’ We decided to spend several weeks contributing in whatever way we could to their recovery efforts before moving on to Australia and our Indonesia rally.

But before we could weigh anchor to head for Vanuatu, just a 55 hour passage away from the marina in Fiji, we had to shake down and address a few gremlins. Boats, and their systems, like to be used. When a boat is left for an extended period unused, things just quit working for no apparent reason. We knew from prior experience that systems that worked perfectly before, and were maintained and protected just prior to our departure, would give up the ghost when we turned them on again. In this case, just to mix things up a bit, the Buffalo worked flawlessly when splashed and throughout day 1: main engine purring to life right away, outboard engines on the dinghies AOK, toilets flushing, fresh water pumping, all systems go. We puttered out to the anchorage in Musket Cove content in our good fortune, but awoke on day 2 to find that gremlins had in fact run amok. One head stopped working (these are electric toilets,) the pump to our potable fresh water failed, one dinghy outboard shot us the finger and stalked off in a huff. The water heater began leaking as well, though this was the least of our worries in the tropical heat. And the stainless steel accumulator tank for our diesel-burner domestic heater sprang an antifreeze leak in the engine room. (This last we could account for without resorting to supernatural causes: under the influence of heat and time, the antifreeze turned more acidic and corroded its steel tank.)

Stan cursed (but only a little bit) and spent the next couple of days tinkering. I am pretty good with technology and electronics, but largely worthless when it comes to handiness around machinery. So I spent that time stowing provisions and prepping stuff for freezing.

Provisioning for a season in undeveloped remote areas is quite an exercise, especially for folks like us who enjoy cooking a wide variety of food rich in fresh vegetables and herbs, and drinking fine wine most nights we are not underway. We don’t care for processed food, and goods available for purchase on the remote islands of Vanuatu range from nothing to very little. Our solution involves prepping and/or pre-cooking, and freezing. Many of the ingredients we love, like most fresh herbs and much of the produce, are simply not grown in Fiji but we were able to send our personal order through a super yacht provisioning service to get beautiful produce and cheeses from New Zealand. Score!!

Freezing fresh herbs or citrus is something most of you on land would never think about, but it works well if you do it right: whole mint leaf stacks, frozen in water in ice cube trays; basil chopped with a bit of olive oil and salt , the pesto-ish result frozen into cubes; thyme and rosemary vacuum sealed and frozen in whole sprigs; lemon, lime and orange zest and juice… I had many days of work to do. And that was before I got to things like cauliflower puree, parsnip puree, veggie-rice cakes, baked eggs for easy passage breakfasts etc. With sourcing, procuring, prepping and stowing, it took nearly 14 solid days of work. But the payoff is worth the effort, all those ‘life is good’ moments, evoked by memorable meals taken while underway or swinging at anchor in some magical secluded spot.

With both pink and blue jobs done, we arrived in Vanuatu on May 11 after a very comfortable trip. So nice to get an easy passage once in awhile! The island of Efate, at first blush, looked in good shape two months after Pam blasted through. We arrived at night, and many of the streetlights in the small capital city of Port Vila were lit (turns out they had only come back in the last few days.) But the morning light revealed some sad sights, one side of the harbor entirely fringed with storm-ruined boats:

We resolved to spend the next few days gearing up for our several-week rotation through the hard-hit Shepherd Islands to the north of us (more on that later.) But meanwhile, that first night at anchor we celebrated our successful passage with braised New Zealand salmon seasoned Moroccan-style, with kale, cauliflower, preserved lemon, pine nuts and red quinoa. All washed down with a lovely bottle of Craggy Range Pinot Noir. Those of you who get Blue Apron (which, come to think of it, is just about everyone we know) might recognize the salmon dish, along with the shamelessly pilfered photo.) So glad I stuck some ras-el-hanout from the spice shop in Pike Place Market into our luggage. If you’d like the recipe, click here. 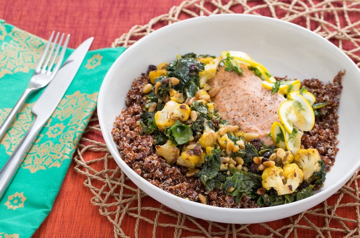 7 thoughts on “Steaming West from Fiji. But Not Without the Persian Fetta!”