It’s been exactly three months since we arrived here in New Zealand from Seattle to get aboard our new FPB 70. What on earth have we been doing all this time? And shouldn’t we be gone from here by now?

Right up front, a disclaimer: this post is going to be all about the boat stuff. Those of you, friends, relations, and other dear readers, who are not boat geeks but rather hoping for pics of pretty anchorages or fascinating tales set in remote corners of the globe, might be disappointed in this one. Don’t worry; we won’t hold it against you if you swipe left on us today. And our next one will be pics of all our interior spaces, taken by a professional photographer. So there’s that.

Difficult as it probably is to believe, we have spent virtually every day since our arrival working on getting our boat and ourselves passage-ready. The activities involved fall into several categories applying to all new boat builds. In our particular case, we also had to plan on some extra challenges by virtue of being the first (of only two) FPB 70s to be built. I’ll break it down for you.

Much of the equipment aboard our boats, especially the stuff without a lot of moving parts, can render many years of good performance. But if it is going to fail, it’s likely to happen in the early days of use. So in addition to accumulating at least 200 hours of engine running time, we have made it a point to use and monitor all the systems we can. Stan calls it “trying to break stuff.”

We’ve had just a few suspected cases of infant mortality, most of those minor. Only one had us very concerned at the time.

On our way steaming back to port from a couple of nights spent anchored at Great Barrier Island, Stan emerged from the engine room and said, “I don’t want to alarm you, but I need you to back way off on the throttle and slow down. My shaft is bulging.”

I shrugged and threw up my hands. “Really? NOW? Can’t you see that sailboat getting ready to cross our bow… what, you can’t wait 15 minutes?” He turned away, muttering something about bellows, and propellers. Probably working on some better phrasing before calling Thomas at Circa with his concerns, is my guess. (Though while I can’t claim much knowledge about our drive train, even I can appreciate that a propeller shaft seal failure would result in large volumes of sea water entering the engine room, never a good state of affairs.)

Thomas did have an explanation for this one: at some point during the build of our boat, the manufacturer of our prop shaft seals made a minor design change. Our two shaft seals are from two different lots, and they don’t match exactly in appearance when we are underway, although they are both functioning just fine.

So that story had a happy ending! So to speak.

We had made innumerable decisions after communicating via e-mail or Skype, in a data-driven kind of way. But there are many choices that shouldn’t be made remotely. “You just have to be there,” as they say. So here we were, and it was time to confront such choices as where we would like some of our door latches… towel racks… art work hung… storm anchor.

Yeah, about that storm anchor. We didn’t want to weigh down the bow by putting it in the forepeak, not to mention the difficulty (and by difficulty, I mean impossibility) of us lifting it out of there the two of us. So we put it about halfway up the foredeck as you can see above. Looks fine to us. But we’ve had numerous conversations over cocktail hour about the challenge of actually, in real life, deploying and retrieving the thing even from such a convenient spot.

We’ve spent many days getting instruction from the talent at Circa, and others, in the design and operation of our systems, in addition to training for Stan in close quarters maneuvering. The latter he found surprisingly challenging. We’ve never had a twin-engine boat before, though our propellers don’t have the distance between them that many twins have. After loads of practice, though, things finally clicked for him and now he’s docking and undocking like a boss.

It’s a bit overwhelming, how much there is to learn. The Maretron monitoring system has evolved over recent years, giving us more data at our fingertips. But until it becomes familiar, that volume of data can be distracting. Let’s just say the screen above (one of ten we have configured at the moment) was NOT my friend when first I gazed upon its mysteries. But I’ve since warmed to it.

While we’ve always used Furuno radars, the beefy, commercial unit we chose as our primary here has a different interface than we’re used to. (It was a week before I realized that the ARPA I was looking for is, for reasons obscure to me, called TT on this one.)

Our electrical panel was particularly intimidating when we first laid eyes on it, but we’ve grown to love its logic and convenience. Power management seems easier on this boat, and our 12 solar panels make it so that we have to remind ourselves to exercise our generator, Onan the Barbarian, on occasion because we are not dependent on it to meet our needs.

Changes and additions after the fact

Several things occurred to us after moving aboard and using the boat that we want, need, and must have. Examples include a place to stow our flopper stopper plates on the aft deck.

Circa mounted a rack for them on the aft face of our barbecue cabinet. This works perfectly: the plates are bigger and heavier than the ones we used on previous boats, and now they are stowed just a couple of steps from where they get deployed.

This is the same photo I used to point out the storm anchor, but you can also see, built into the forward mast structure just forward of the windlass and above the Samson post, a horizontal rectangular opening whose purpose is to function as a fairlead for a snubber or other line extending over the bowsprit.

What we found when we did use a snubber on our anchor chain in strong wind, though, was that the line sawed itself back and forth across the space as the boat kited in the wind. This made not only an outstanding opportunity for chafe, but also an infernal noise. While it wasn’t possible to have the gorgeous trumpet-shaped fairlead we had on the 64, Thomas did make us a bolt-on fairlead, which is getting its initial test as I write this, at anchor in the Bay of Islands (chafe guard pending.) 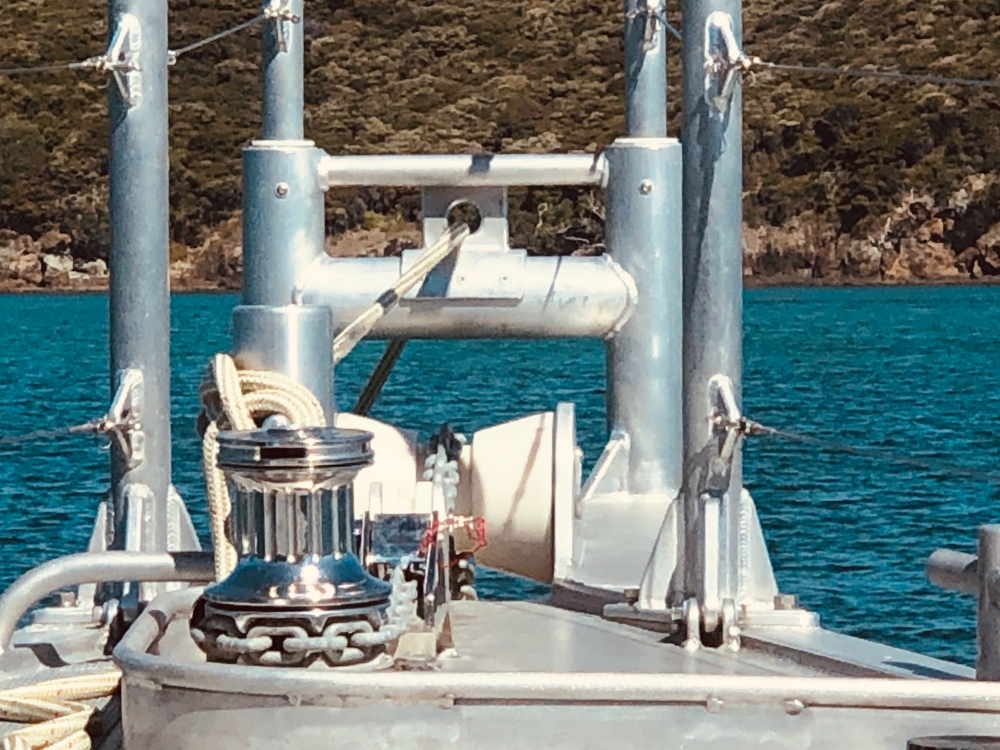 The ultimate assessment of a new boat design doesn’t happen until the boat is built and gets in the water and underway. Lots of kicking of tires, and recording and evaluating of data, happened during Circa’s 6 weeks of builder’s trials after she first splashed in early August. Once we got aboard in mid-September and began using her in a sustained and practical way, we identified a few issues, some more mission-critical than others.

The first flaw that came to light we mistook for a case of infant mortality. We have two pairs of Victron inverters, each pair in a master-slave configuration, to provide 230 Volt power from our house battery bank. This is designed for redundancy, but also so that, should we decide to pile on a great demand for AC power, we can run both pairs simultaneously and have them share the load.

One of the master inverters failed, with a high-temperature error message. The Victron techs in Auckland could find nothing wrong with it, but the failure kept repeating, so we traded it out for a new unit… only to have it fail in the same way. 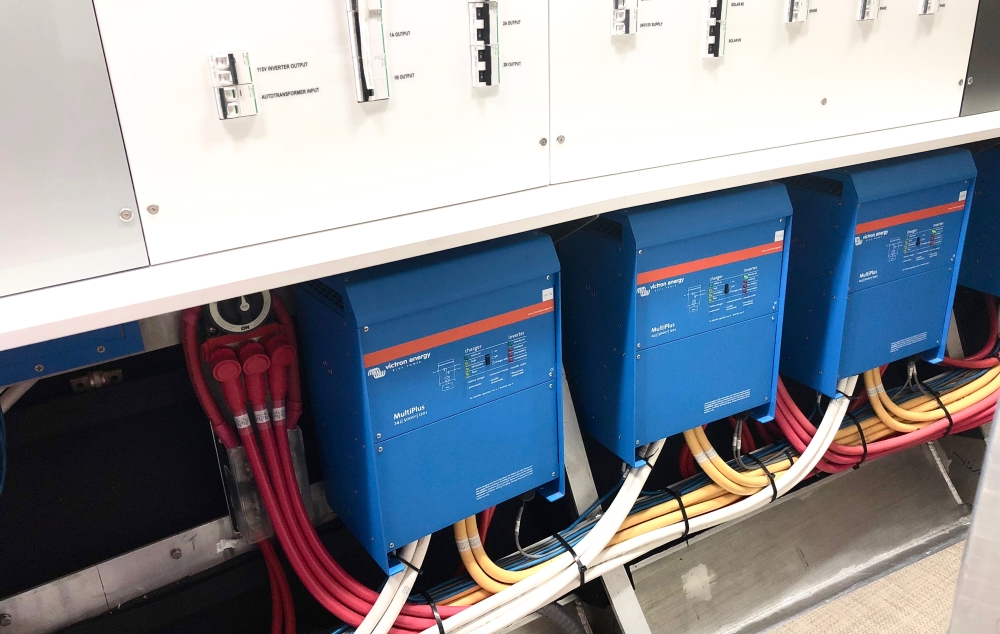 You can see the empty space where the failing inverter, in the left foreground, had been removed for replacement. Out of view, hanging on a bulkhead perpendicular to that missing inverter, is a Victron 240/120 autotransformer. Its purpose is to convert 240 volt AC power to 120 volts, in case our separate 120 volt inverter (also not shown) fails. The autotransformer was interfering enough with air circulation on one side that it caused the inverter to overheat. Problem easily solved, and will be avoided on the 70 currently under construction.

Another example is our swimstep/boarding gate ladder. You can see it mounted on the swimstep in the pic below of our aft deck, with us tied at the fuel dock. Clever design in that it can be folded down from that position to become a swim ladder, or lifted out of that space and inserted on either side ahead of the tenders, where it can fold down and become a dockside boarding ladder.

The problem with it is its weight. There’s simply no way for me to sling that thing around on the deck. But even Stan had a lot of difficulty, with a risk of the ladder or Stan going overboard while attempting to deploy or retrieve it. On top of that, we might have deformed it beyond repair by squashing it against a dock piling. But if that did happen, it certainly would have been a deliberate statement on our part, and not due to any lack of skill, or lapse in attention while docking. Not at all.

Circa’s making us a new and improved version, which should be finished tomorrow. The existing one will probably make a fine stern anchor though!

The final example I’ll mention is the one truly serious issue we have found aboard this wonderful boat, and that is our steering. We have all kinds of redundancy and failsafe systems in place to handle loss of steering control from various points of failure, which discussion will wait for a future blog post. Our normal steering control is via a Simrad AP70 autopilot, and a pair of identical Accusteer pumps intended for redundancy, but also with the ability to easily engage the second one as a “dock pump” or “boost pump” for close quarters maneuvering (or challenging sea states) when quicker rudder response is desirable.

During our initial outings maneuvering the boat under unrealistic conditions (high speeds and hard acceleration while cranking the rudders hard over) we saw frequent failures, even with the boost pump engaged: the autopilot would alarm with “loss of rudder control,” and require the push of a few keys to get steering control back to the autopilot. Not a good feeling. Under commonly encountered conditions underway like 1.5-2 meter quartering seas, the same failure occurs, although not (so far) if the main and the boost pump are both engaged. Clearly not an acceptable state of affairs. Lots of phone and e-mail discussions have ensued with Steve Dashew, with all the relevant parties at Circa, and with industry experts. I won’t delve into the proposed solution since we are awaiting parts before it can be implemented. But we will be sure to update this post; our sigh of relief should be audible wherever you happen to be.

In the meantime, it’s been mostly work and no play, but we have gotten to enjoy some lovely evenings at anchor at Great Barrier Island (above,) the Bay of Islands, and Auckland area.

The best news is that it finally feels like we are getting to the end of this phase. Living aboard and operating our Buffalo is becoming embedded in our muscle memory, and our thoughts are turning to what awaits us in distant cruising grounds.