Welcome to the second half of our guided tour. Today I’ve got photos of the deck areas and fly bridge.

We’ll start on the aft deck.

The camera lens faces forward and to port. You can see the open door to the house on the right side of the photo. The aft-facing settee has been one of our favorite surprises after moving aboard. It’s a covered and comfy spot to either sit to deal with shoes, or just catch a nice sheltered view aft over the barbecue countertop. The stairway on the port side leads up to the Matrix Deck. The pair of port lights in the base of the settee (plus a third one out of view) provide light and ventilation to the aft guest accommodations.

Facing aft from the same vantage point, the barbecue and its generous cabinet come into view. We are thrilled with the electric barbecue, after some nail biting and skepticism on my part. Traditional electric cooktops = bad in my book, as a rule. But this thing has converted us. Non-stick grills that just pull right out to wash in the big sink on the port side, hidden in this pic by its Corian insert cover. Gets nice and hot with nearly perfect even heating, unlike the propane burner BBQs we have used in the past. And simple trays underneath the elements take a bit of water prior to cooking, preventing flame-ups and grease buildup. The only thing that might get me more enthused would be an induction version…

The next two pics look forward from the port and starboard sides of the aft deck. 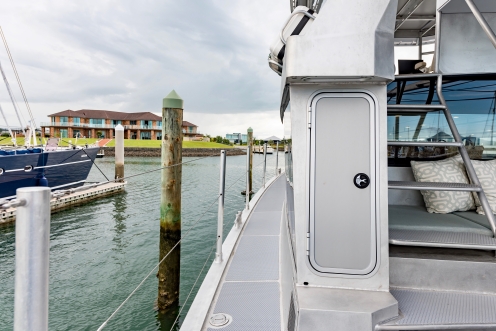 The locker on the port side is where I stow all my dock lines. You can see our life raft mounted up above in its cradle. Where to mount the life raft is something Stan spends a long time considering; there are numerous trade-offs involved. But if we ever have to deploy it, I will be grateful he took the time!

On the starboard side is the wheel that an astute reader noticed in a photo on a previous blog post. As I told him, it’s one of numerous steering fail-safes built into the design of the 70, which I promise to outline in a future post. This wheel will steer the boat if there is complete loss of power to the autopilot computers (both of them) and to the steering pumps, but assumes the hydraulic system is intact.

Just outboard of the open house door, in the space forward of the wheel, is our wet locker.

Facing aft from the port side next to the BBQ cabinet, you can hopefully appreciate the spaciousness of this aft deck, especially in comparison to the 64. We kept both our tenders from the 64: Plug Nickel, the Circa-built aluminum “tinny” on the right side of the photo, 4 meters (13+ feet) long with 40 HP outboard; and Penny, 2.5 meter (8 feet) aluminum-bottomed RIB with her 5 HP outboard, on the starboard side. I love how the booms on the 70 have their own cradle on the aft mast, so they sit snug and tight when not deployed. There is a power winch back there as well. 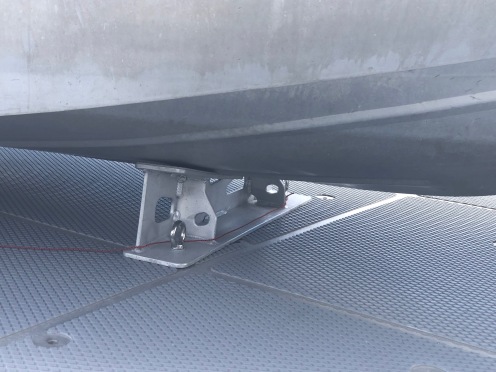 Plug Nickel, the large tender, rests on traditional deck-mounted chocks as seen above. The chocks are not as tall as those on the 64. We opted not to try for a davit suspension apparatus that would allow us to stow this tender either inboard or outboard of the lifelines. The physics would have been a challenge, for an insufficient payoff in our view; moving that heavy weight outboard of the aft deck creates an immediate and dramatic list in the boat compared to simply having the tender deployed and in the water.

That brings up a useful new feature on our 70, though: we have a pair of water ballast tanks whose pump we can engage with the flick of a switch on the electrical panel, to correct list or heel. We find ourselves making frequent use of it.

Our normal state is with one stanchion and lifelines removed on the aft deck outboard of the big tender. This makes launch and retrieval a snap, because we only need to lift her a few inches above the deck to launch or retrieve. The ability to get a heavy dinghy off the boat quickly is key to a safe deployment.

Our smaller tender, Penny, is another situation altogether in that she is so light. The stanchion-mounted davits you see in the pic above can be flipped 180 degrees so they extend outboard, allowing us to clear room on the deck, or for streamlined launch and retrieval during a longer stretch at anchor.

Above is the rigging setup on the port side. The rigged power winch can be seen above, just aft of the fly bridge. The four clutches mounted above the manual winch handle the fore and afterguys for the boom, and the lines used for the flopper plate and large tender, respectively.

The setup is the same on the starboard side, minus the power winch.

This angle above shows the aft boundary of the Matrix Deck. The other three sides are glass, but this aft ‘wall’ is made from 3 roll-up panels of clear plastic, allowing a person (and by “person” I mean Stan) to step aft from the Matrix Deck, either to service the power winch, or to climb the handy ladder steps to access mast-mounted equipment or the solar array on the fly bridge roof. There’s even a fresh water spigot up there so “we” can hose the panels clean! 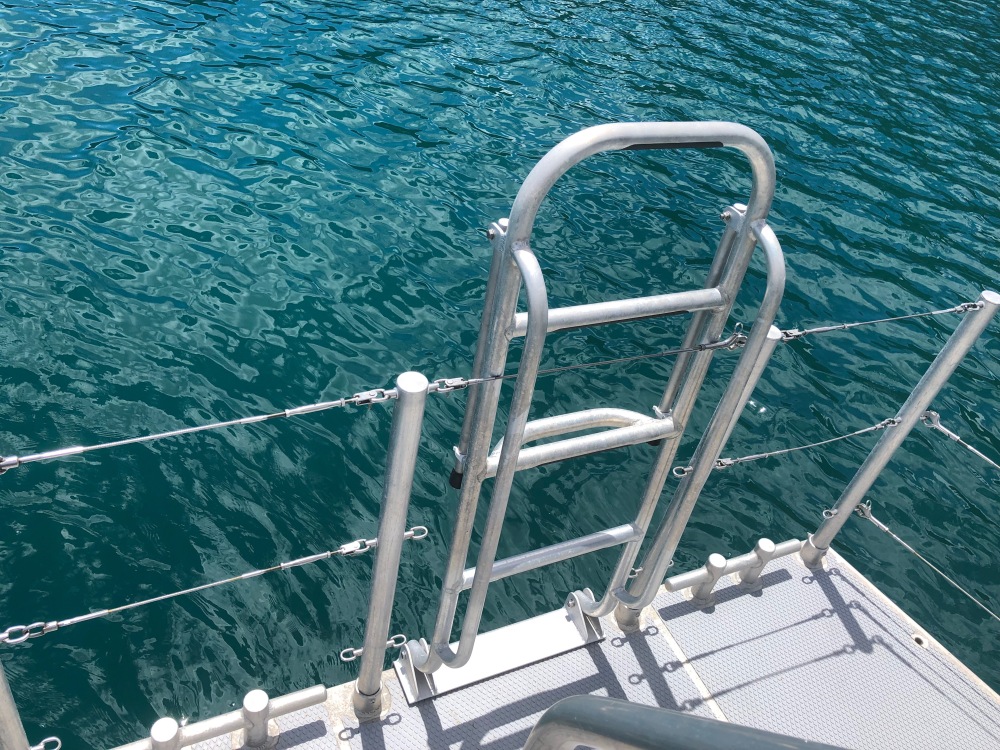 Here is our new-and-improved boarding ladder, much lighter weight but same clever multi-purpose design. You see it above mounted on the swimstep, where it is ready to fold down into the water as a swim ladder. If we are stern-to a dock, we could also throw some kind of plank on there and use it as a short passerelle. When mounted in the boarding gate location on either side of the aft deck, the legs can be unfolded, landing its rubber feet against the hull as it folds down into a side boarding ladder. 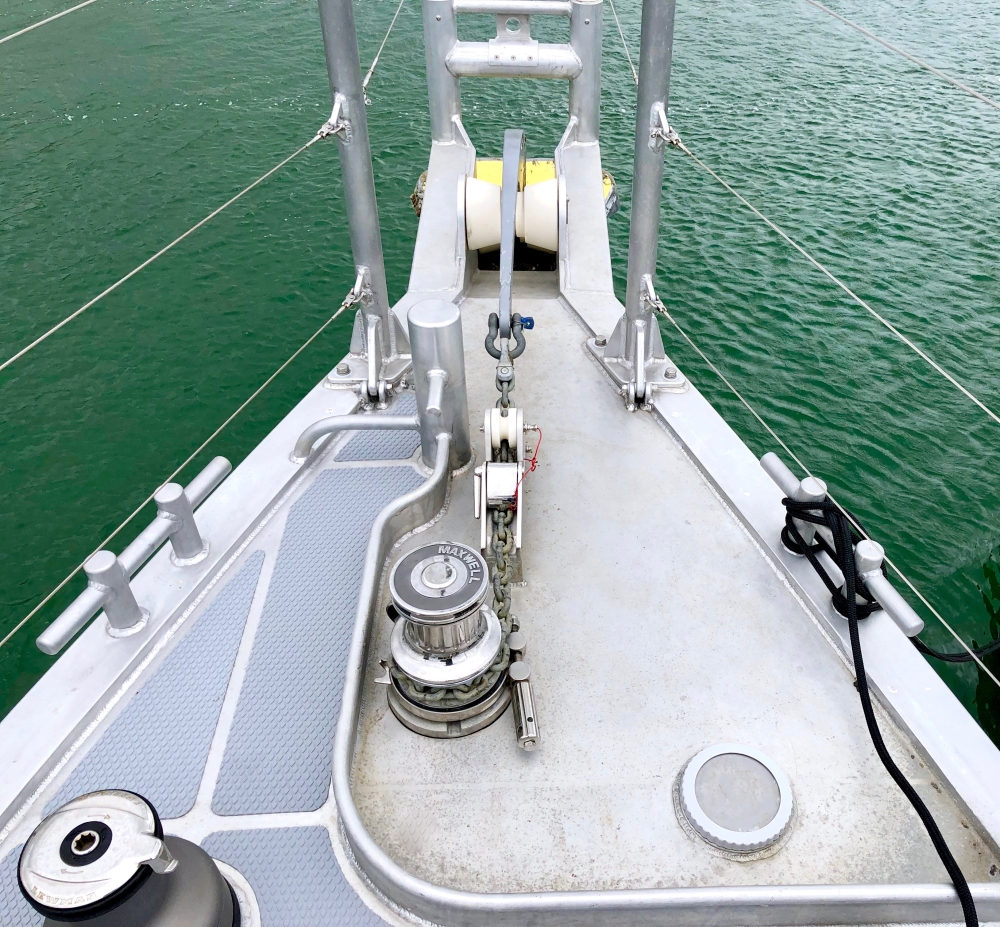 Our main ground tackle consists of a 110 kg Spade anchor with 100 meters of 12mm G-40 chain. We use a snubber line most of the time, which is 1” double-braided nylon. On the right side of the pic, that circular thing is a metal cap, in place of the cowl vent to the dorade servicing the forepeak. We prefer to have that sealed when we are underway. A power winch is in the left lower corner of the photo.

Above is the foremast, with its horns, various lights, and Airmar weather station.

The master stateroom berth is just below this portion of the deck. While sleeping, our heads are lying just inboard and barely aft of the two dorade vents you see. Additional ventilation comes through the hatch, of course. At anchor with a breeze blowing, we need to close the hatch if it rains. But in a marina, we can usually leave it open in the rain because the overhang extends well over it.

Last but definitely not least, our Matrix Deck. From this forward view, it’s easy to spot the large pair of grilles, which draw copious welcome air down into the great room below.

A door opens forward from the Matrix onto a ballroom-dancing-sized section of the house roof, at the forward edge of which is a fold-down ladder onto the foredeck as on the 64. We have been calling this area the drone launch pad, and using it as such!

This space is so huge, so visually welcoming and so physically comfortable that it’s where we hang out virtually every afternoon/evening. I suspend my TRX apparatus from the aluminum frame overhead to do my workouts. We put padded interior/exterior vinyl woven matting on top of the deck floor. It’s attractive, easy on the feet, and makes for a quieter space.

We weren’t sure what kind of fixed furniture we’d want up here, outside of the integral settees. So we opted for teak and steel furniture instead (not shown) that folds and neatly stows, strapped to pad-eyes on the wall on the port side. 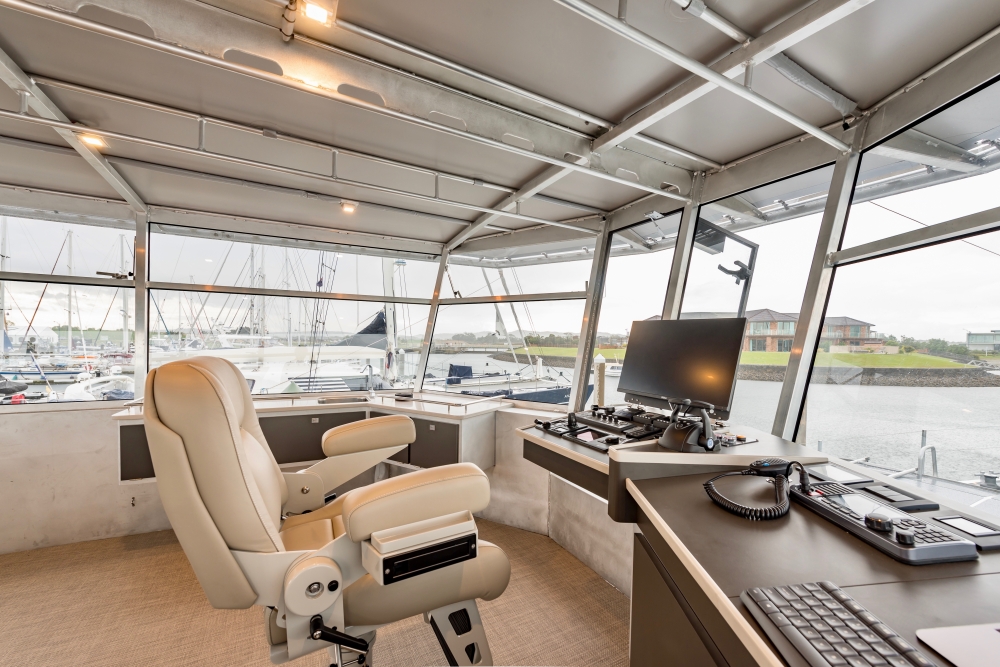 When docking or undocking, Stan drives the boat from this upper helm. Until we make some passages beyond the day hops we’ve been doing, the jury is still out on how much time we will spend on watch up here. The FPB 78 owners seem to all swear by it, and have installed some sophisticated instrumentation and displays to support that. We are simply not sure yet, as we have not used the fly bridges on our two previous boats for more than an occasional change of scenery during watch standing on longer passages.

So we have made this secondary helm very basic to start, just a single display, and an iPad (not shown) docked next to it that gives us our Maretron monitoring data. We have had additional capacity planned and cables run during the build, though, in case we decide to add more at a future time.

Now I’m off to finish our satellite phone data connection set-up, with any luck. I hope you enjoyed the tour! 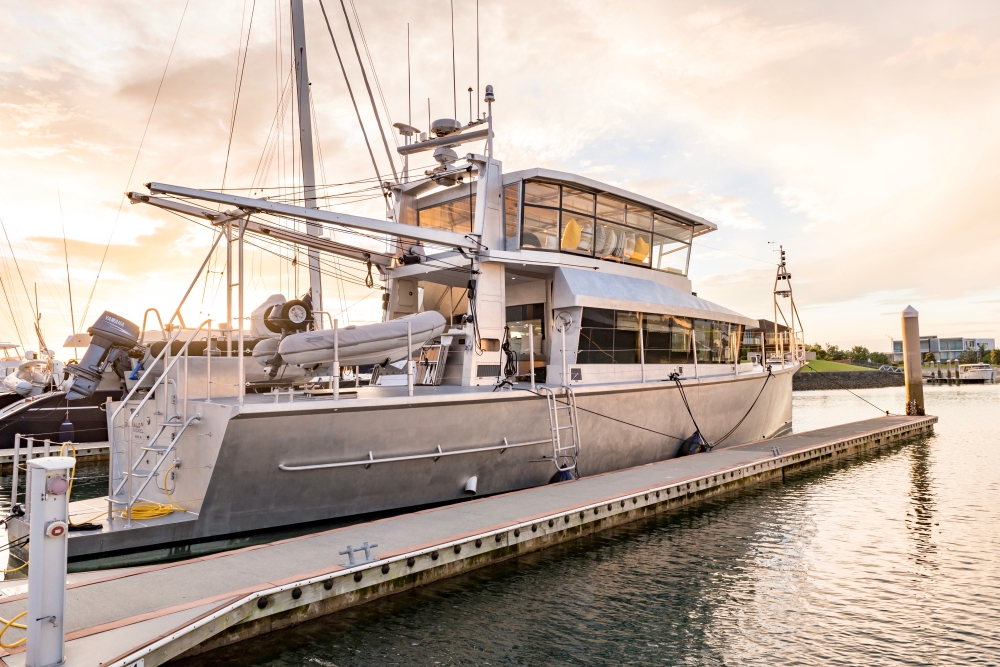 11 thoughts on “Welcome to Our Home, Part II”