After making the 2.5-day passage together from Raja Ampat, Indonesia to Koror, Palau, I spent a week with Stan, at anchor in the gorgeous Rock Islands and snorkeling in its pristine waters.

Palau is now officially named Belau, by the way, though it’s confusing, because few people there seem to be calling it Belau at the moment. 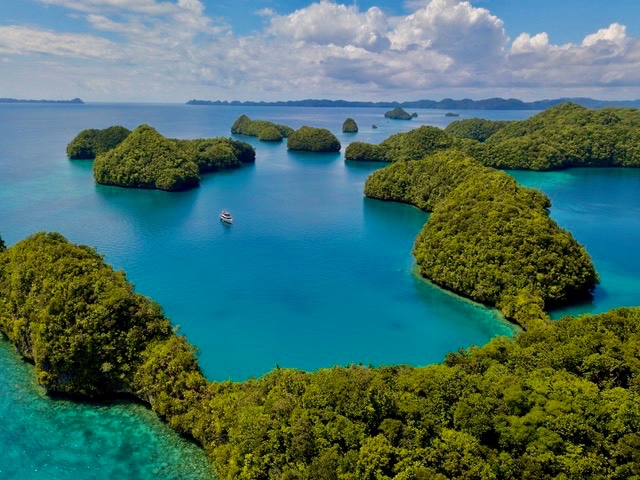 Then it was time for me to make a visit to the States… Stan had been back more recently, but for me it had been nearly nine months. So, while I was getting my family-and-friend fix, taking care of some business, and enjoying the city of Seattle in its springtime glory, Stan was readying the boat to make the 5-day passage to Japan.

He needed reliable crew to help, and our good friend Thomas from New Zealand stepped up… who also happens to have designed our engine room and some very important systems on the Buffalo. Tomo has a friend named Finbar, who doesn’t work for Circa Marine but is quite comfortable aboard boats and was keen to make the trip.

We know Tomo well, and trust him without reservation… but had never met this Finbar dude. Naturally, I grabbed my phone and pulled up his Facebook profile. I don’t know why I did this, it’s not like there’s much of anything relevant to glean from it, right? But when this photo caught my eye, I just knew we’d made the correct choice and that he’d fit right in! 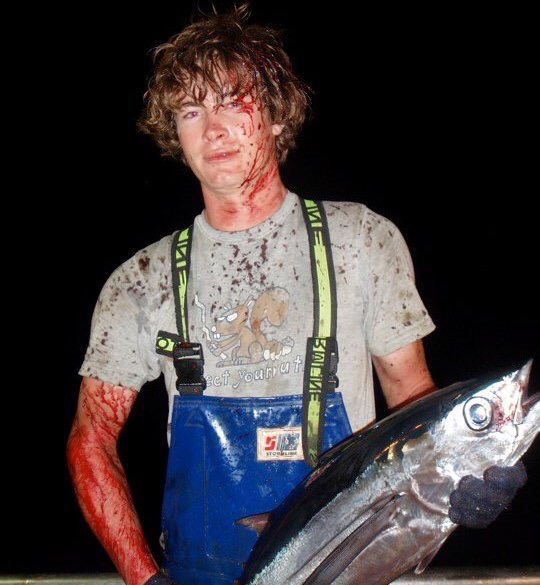 Finbar assured us he’s much older now and has cleaned up nicely in the intervening years, but we did not count that against him.

Stan and the guys had plenty of chores to keep them busy in the couple of days they had before departure.

Weather was blistering hot, so everyone did what they could to keep cool during the days, and well hydrated… especially in the evenings [photo deleted due to sensitive content] 😉

One alarming item on the list was a swarm of bees that took up residence underneath one of our radars. Why they chose our boat, anchored in the middle of a large bay far several minutes’ dinghy ride from shore, was a mystery to us. Turning the spinning towed array radar antenna on was not helpful. Stan began to gather weapons of mass destruction to address the invasion. But then I heard from our friend Brett in the States (via a Facebook comment… do you see how useful it can be?) He said the hive was no doubt moving to a new location, and had stopped for the queen to rest. They would be gone on their own within a day or so… and he was right! So, swarm of bees: check.

The passage itself was fairly easy and uneventful according to Stan. Of course, much of that assessment is due to Thomas and Finbar being so energetic and helpful at every turn that Stan felt pampered and virtually stress-free. (He’s been giving me the side-eye ever since, which tells me my pampering skills may be lacking.)

For anyone planning such a passage, it might help to know they encountered a lot of fishing activity on days 2 and 3 of their 5-day passage… in other words, in the middle of the Pacific Ocean. Mostly these were Chinese boats using long lines. Every ¼ to ½ mile along the 3 to 4-mile long line, they used an AIS target. While the guys guessed it would have been safe to pass between the AIS targets, the line in between being weighted to stay well below the surface, nobody wanted to test that theory, so they did a lot of deviating around radar and AIS targets.

In the photo below, the red boat is Buffalo Nickel. The blue target is an actual boat, and all the green ones are the AIS beacons along a fishing line.

They made their landfall on June 3 on the island of Ishigaki, Japan, which is about 250 miles southwest of Okinawa. Here they are tied up to the humble commercial dock wall. (More about wall ties in Japan later.)

After a very thorough and long-lasting clearing in process with customs, immigration etc. (if you’ve heard the Japanese take their bureaucratic procedures very seriously, then you’ve heard correctly) Tomo and Finbar left for some well-earned touring days before returning to New Zealand.

Once I rejoined the boat, it was time we got this party started! Before casting off for some day hops up the Ryukyu chain of islands that includes Okinawa, we briefly became “regulars” at a nearby Izakaya (neighborhood pub/restaurant.)

In our next posts, we look forward to sharing with you our emerging impressions of the Japanese people and their culture, and also the experience of cruising here, which is quite different from anyplace else we’ve traveled on our boat.

3 thoughts on “Palau to Ishigaki, Japan”